The bond between a mother and son is one of the greatest bonds between mother a child. From birth, all children yearn for their mother to provide safety, guidance, and nourishment. As the years go on the bond between mother and child grows, from the first words to the child’s first steps, to the first student-parent-teacher conference. Many young men have a very strong bond with their mother well into their adulthood. Most men would do anything for their mother including fighting other kids. Remember back in the 90s and 00s, kids were notorious for your mama jokes. It was all fun and games until someone talked about your mama. Then it was time as Lil’ Scrappy’s famous line says: “I Wanna Put Them Paws On ‘Em.  Then a shoving match would ensue then someone threw dem hands.  Hundreds of kids have been in numerous fights after a yo momma jokes went too far.

I was thinking about how many men still have an umbilical cord still attached to their mother for nourishment, safety, and guidance as adults.  You probably know one or two men who have never left their mother’s home to experience the world on their own. I’m not knocking the men who take care of their mother due to health reasons and other living things but the men who are able-bodied.  When the mother makes all the decisions for her son, which causes a pattern of dependence. If a son still considers his mother to be the main priority in his life, before even his partner that is a serious problem. I’m not going that deep to deal with the subject of momma’s boy but something closely related.
I remember reading a few months ago, on a book that touched on this subject. I wish I could remember which one.  I’m going to dive into this area a little more from my point of view. A lot of males in my generation grew up in a single parent home with their mother being the mother and the father. These males saw their mother hold down two or three jobs just to maintain things. Some had their fathers in their lives but many didn’t. Some fathers were weekend dads, some were child support check dads, and some were hustlers in the drug game and some never knew. Theses are the things I saw growing up. My dad was the weekend/holiday dad, who would come when he wanted to spend time with his kids. I don’t sugar coat it anymore like I use to cover up the hurt I felt. Out of  18 years of he probably spent a consistent ten years around. Which is sad that he was less than ten miles away.

Anyway, I’m over it now back to the subject. So I saw a lot of my friends become very protective of their mothers. Protected to the point of letting nothing to harm her by stepping up to be the man of the house. I had a friend who pulled a gun on his mom’s so called boyfriend to protect his mom.  I had another friend who let his dog loose on a man who came to visit his mom. The stories can go on and on but I’ll spare you. Young men have started to protect their mothers at earlier stages of their lives. I believe a fire is ignited inside of young men when they see their mother in a vulnerable position. Thing such as his mother crying, his mother is in a domestic dispute, or his mother works to the point of exhaustion just to provide for the household. Young men pick up on this and feel it is their job to protect their mother.
A good example of this was when I was about six and my brother had to be about three. I remember sitting at the family table eating spaghetti and my father came into the house in a rage. My mother and father started arguing and eventually, it got physical. My mother pulled a knife from the drawer to get my father away from her and eventually I got up from my chair and my mother yelled for me to get my brother and go my our rooms. I remember hearing the shouting and eventually, the shouting stopped. My father left shortly after and I could hear my mother crying from her bedroom. You forget how you feel even at that age. As I write this, I can feel how I wanted to protect my mother from that day own. As the years passed, I never left my mother’s side and found often cry if she left. My parents divorced and it was a long process to go through. I remember being asked by a social worker if I wanted to live with my mother or my father. My response was my mother everything. (Side Note: No child should be forced to choose which parent, they want to live with never especially at a young age). Seeing your mother missing work to go to court over and over again only ignited that flame that was ignited years before. My mother was strong no doubt but the more I saw the more I could do. I learned quickly how to cut grass, get my first job at eleven, and do thing around the house to help out. I became handy but taking things apart and putting the thing back together. I remember on the 7th grade, I was on the school bus looking to see if my mom was home and I saw her can be parked under the carport. She had a white Ford escort and from the bus, all I saw was a dent in the driver’s side. I rushed home so quick to see what had happened. My mother was hit in the driver’s side by another driver. I saw my mother in so much pain after the accident and again that fire rose up to protect her.  I remember during this time my mother was seeing this guy who worked at the local pizza place in town. She introduced my brother and I to him at the pizza place and I was not having it. I became extra protective and would act a plum fool if he came over to see my mom.  Every single time we went anywhere I felt like secret service ready to step in.
He would get the Kobe Bryant look from me: 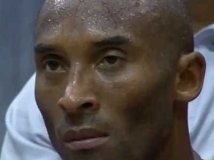 Like many young men, you start to take on a role of your mother’s father/boyfriend/ or whatever you need to be.

Have you ever noticed how your young son could be in another room and a gentleman/friend calls then all of a sudden your son is directly in your space?
What about your son asking who on the phone? Who was that at the door?
What about when you out in public and you see an old male friend? You try to introduce your son to say hello and your son ignores the man.

I’m totally guilty of all of these. I didn’t realize how protected I was until a few years ago. I remember my mother was talking to some chump in Virginia and I didn’t find out until like a year later.  Granted I’m fully grown but that kid inside of me was like who is this “Jive Turkey”. Seemed like everyone had met the man, except me.  You know I started being like NYPD Detective  J. C. Williams from the show New York Undercover. I was going in finding faults in the mystery man’s story. My mom was good tho, she withheld the key information I needed, the mystery man’s name.  I wasn’t until a good friend of mine has a similar situation with me on the phone and every time I would call her son would pop in and out. I got so good with knowing when he would be coming back to bother her. She would question how I knew, I told her it was through my experience and kids have a six sense.  The role of a son was never to be as protective toward our mother’s. It’s normal for a son to have a natural tendency towards protecting females in their lives. It’s simply a hard-wired, built-in, and innate drive for the protection of the one who carried us for all those many months. Even if it was for 10 months (yup I wouldn’t come out on time).

My best advice for the single mother’s with son is to have the conversation with your sons that the protection he has for his mother will have to be transferred to his wife one day. Establish healthy boundaries with your son.
Fellas,
Have a conversation with your mom about your protection of her because you may be blocking her from truly being happy and finding love again. Once you have that conversation you can then be your mom’s secret service and weed out the busters (Kidding but serious at the same time) 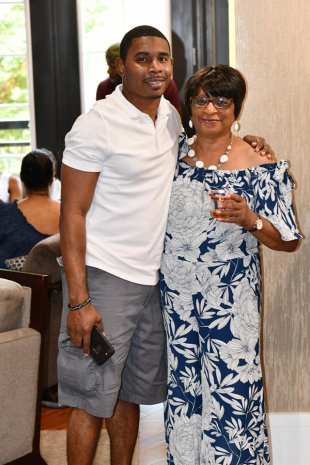